Since 2003, year in which it started to export up to the present day; Blueberries S.A. has significantly increased production and sales, thanks to planting more acreage and the introduction of new varieties of blueberries, ensuring quality throughout the production process.

In addition to favorable growing conditions and soils of excellent quality, Blueberries S.A. has a professional team and technical excellence, as well as the latest technology, including frost, hail control and drip irrigation systems. It also has a warehouse and cold packing 4200 m2, built in 2005 with the latest technology available. In 2007 an extension of the same took place, reaching a total area of 6000 m2, with capacity to process 1.8 million kilos per season. Also, it has a fumigating chambers with methyl bromide and the most modern cold storage for fruit maintenance.

Among the facilities, there are five tunnels, Californian type, with capacity for approximately 74 positions. Three of them built for products with destination USA (called clean area), with capacity for 46 positions. The remaining two other destinations, have a capacity of up to 28 positions. For the fumigation treatment, Blueberries S.A. has 3 (three) chambers, with an operating capacity of up to 74 positions. Such fumigation chambers, like tunnels and cold storages, are intended for berries destined for USA, which are authorized and certified by APHIS / USDA, SENASA.

Selection and packing are done on 12 sorting lines with 60 thousand kilos of maximum daily production, working about 18 hours a day.

The production process of blueberries encompasses the preparation of the soil and planting until it´s sale on the market. It consists of six stages:

1) Soil preparation
This first phase includes working the soil and the addition of substrates to increase levels of organic matter, so as to improve soil quality.

2) Plantation
This takes place on land already prepared for the autumn-winter period, with a density of 3000-3500 plants per hectare. The distance between lines is 3.6 meters and the plant spacing is between 0.75 and 1.2 meters. Once the plants are planted, a plastic cover is applied on the beds during the early years of development, and then the bed is covered with pine bark. This keeps moisture in and provides organic matter to the bed.

All plantations are watered and fertilized by a system called “drip irrigation”. This permits a high sanitary level and appropriate quantities of wax on the fruit surface. Maintaining weed control is critical, to assure nutrients and water go to the blueberry bushes and not to weeds.

3) Harvest
The harvest takes place from September to early December, according to the degree of maturation of each variety. This is done with specialized labor, gathering the fruits manually for later packaging. This practice is done selectively, according to indexes of fruit ripening, which are the color and size, and involves carrying out up to eight harvests per plant, depending on the variety.

4) Storage
Fresh blueberries are stored in a cold chamber that conserves the berries between 14 and 21 days, with a temperature of 0 ° C and a relative humidity of 95%. The logistics must be coordinated so that the fruit remains stored at source the shortest time possible, so it can stay longer in destination, for its distribution and marketing.

5) Transport
The main priority of this stage is to maintain strict temperature control, which should be between 0 ° C and 5 ° C.
95% of exported berries are done by air, while the remaining 5% via maritime shipments. In the latter the fruits are packed in controlled atmosphere containers, a system that extends life by lowering the respiration rate.

Both have modern cold storage, so the fruit is constantly kept refrigerated operating 24 hours seven days a week.
From the Ezeiza airport shipments leave worldwide with a large availability of passenger flights, cargo space supply and diversity of direct destinations and connections.

6) Presentation
Fresh blueberries are sold at market in recyclable PET trays called “clamshells”. If its destination is the United States, clamshells can be 4, 6, 11 or 18 ounces, and if the destination is the European markets, it may contain 125, 150 or 200 grams.
Blueberries S.A. implements a system of traceability, by printing a unique code on each blister, to determine the “path” of each fruit that reaches the consumer. This system provides benefits for both companies and consumers. For the company, it generates useful information for process control, management and product quality certification, in addition to identifying responsibilities at each step of the process. For the consumer, traceability means transparency and the availability of information to the health authorities allows better control and quality assurance of the product.

Services for local producers
Blueberries S.A. offers to all local blueberry producers a quality service of classification, packaging and export, to leading markets in the countries with the highest consumption in the world. This service is carried out with high-tech equipment, and includes storage of the fruit in the most modern cold storage facility. Fumigation exclusive chambers with methyl bromide, implementing strict quality control in packaging and export. 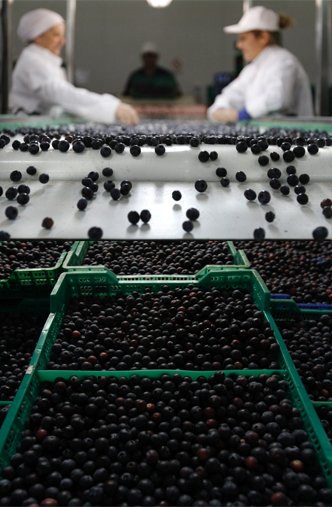